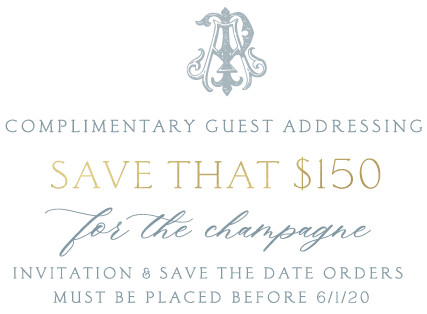 anatomy of an invitation suite!

Inner envelopes are traditionally used together with the outer mailing envelope. If an inner envelope is included, the guest names are repeated inside and only the titles and surnames are used, ie: Mr. and Mrs. Darcy instead of Mr. and Mrs. Fitzwilliam Darcy.

Children’s names are listed under their parents. If a plus one is invited, this is the place to note that, ie: Miss Jane Bennett and guest.

There are several guidelines for how the guest address on the outer envelope of the invitation should be written:

RECIPIENT NAMES - The envelope should be addressed using the appropriate salutations, such as Mr., Mrs., Miss or Ms. If the invitation will be sent to a family, only the parents’ names should be included, ie: Mr. and Mrs. Fitzwilliam Darcy. The children’s names may be listed on the inner envelope. If no inner envelope will be used and it is important to designate that the children are invited, they may be listed on the second line on the outer envelope, under their parents’ names. If under 18, they should have no saluation, ie: Hunter and Lauren. If they are over 18 and living at home, they should have a salutation, ie: Miss Jane Austen.

For an unmarried couple living together, the woman’s name should always precede the man’s, ie: Miss Elizabeth Bennett // Mr. Fitzwilliam Darcy, each on a separate line. It is also appropriate to include them on the same line, space permitting.

ADDRESS - Traditionally, there should be no abbreviations in the address, this includes the designations for Street, Avenue, Road, etc., as well as the state name. If your guest lives in an apartment, this should be noted on a separate line under the streeet address and the word, “apartment,” should be spelled out.

Traditional wedding etiquette has several noteworthy guidelines for the return address on the outer invitation envelope:

NAMES - Traditionally, the name(s) of the sender are not included in the return address printing, only the street address, city, state and zip are used. The address used is based on who is issuing the wedding invitations, ie: if the bride’s parents are hosting, then it should be their address printed on the envelope flap.

The exception to this is if the couple would like wedding gifts mailed directly to them. If so, it is recommended that the bride use her address instead to let the guests know where to send wedding gifts.

CITY/STATE - Both the city and state should be written out in full, without abbreviation. The zip code should directly follow the state on the same line or on its own line below.